A few weeks ago, I traveled to North Carolina.  As I drove down the interstate and crossed the border from Virginia to North Carolina, I was struck by the large fields of what looked like white flowers along the road.  I pulled over to get a closer look and realized that the blossoms weren't flowers with petals, but cotton.  I became enthralled with the beauty of this plant as explored the almost alien looking blossoms that explode into soft blossoms.


I took a breath and walked deeper into this field.  I ran my roots down into the earth and opened to listening to this plant.  As I felt myself sink into this place and this plant, all I could feel was pain.  "We have been used as a weapon" these beautiful blossoms whispered.  I felt an overwhelming wave of sorrow pass through me.  I shouldn't have been surprised, I know much of the history of this plant.  But I was still surprised, I have never felt a plant communicate such pain so strongly.

Cotton has been used by humans for clothing for upwards of 7,000 years according to historians.  While clothing and goods made from cotton have been a part of human barter and exchange almost as long, it wasn't until the Renaissance and Enlightenment periods of Europe that cotton become a plant that was a global commodity.  Once it became popular among the ruling elite in Europe, the demand boomed and a global market ensued. 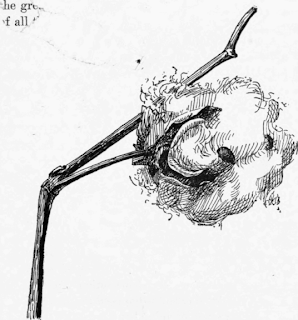 
The growth of Cotton in the United States economy was connected with a boom in global slave trade and the exploitation of this plant is intrinsically linked with the history of exploitation and genocide committed against Africans and African Americans through the middle passage and slavery.  Historians estimate between 2 and 4 million Africans died in route to the "New World".  It's difficult to quantify the atrocities committed against African Americans during slavery.  Torture, inhuman work and living conditions, exploitation of children, sexual violence, and economic exploitation were commonplace during slavery.  And while Chattel slavery ended after the civil war, the legacy of racism and white supremacy has continued in the United States.  The United States government has still offered no formal apology or reparations for this genocide.

Cotton is a plant whose roots are soaked with the blood of the ancestors.

The legacy of exploitation of this plant and the people connected with it continues.  More pesticides are sprayed on Cotton than any other plant.  These harsh chemicals are often sprayed as workers and their children standby.  In California, pesticides sprayed on Cotton are one of the leading causes of worker related illnesses connected with pesticides.  These chemicals run off the land into watersheds and impact the surrounding ecosystems dramatically.  Birds and Fish have been proven to be seriously impacted by the use of pesticides on Cotton plants.


And yet, this plant has medicine that has been used by midwives and wise women for generations.  The root bark of this plant is used by midwives supporting the labor of women bringing new life into this world across the globe.  This plant is also used sometimes to help regulate menses and to bring on bleeding after long periods of amenorrhea or an absence of menstruation.  The medicine of this plant is quite powerful in this regard, and can bring on uncontrolled bleeding if not used correctly.  So if you are seeking support from this plant, please contact a trained herbalist or midwife.  This is one of the few plants that I would say, do not explore the physical properties of this plant without the support of a trained professional.


As I stood in the field in North Carolina, I felt the tension between this plant's legacy and the medicine of this plant.  What does it mean about our culture when a plant that supports women bringing life forth into this world has such an intense legacy of exploitation?  What would it look like for us, as a people to begin to move towards right relationship with this plant?  What kind of reparations are needed to heal the wounds inflicted upon the people and the land connected with this plant?  How can we move towards a celebration of the life sustaining medicine that this plant carries?


Want to learn more about how to get involved with efforts to move towards right relationship with Cotton?  Check out the Pesticide Action Network to learn about ways to get involved.

Claire Bohman
Claire Bohman is a certified clinical herbalist with over 10 years of experience as a professional healer, working as a mental health professional and community organizer before her work as an herbalist. She brings with her over 20 years of experience as a practioner of earth based spirituality. She has incorporates this perspective into her work and her approach to healing. She is currently enrolled in a Masters of Divinity program at the Pacific School of Religion and will be ordained as an Interfaith Minister in June 2014. In addition to her practice, she is currently serving as a volunteer Chaplain at a Bay Area hospital. If you are interested in a consultation or to inquire about handmade healing medicine, contact herbalchaplain@gmail.com or check out her website at www.sacredplanthealing.com Hablo Espanol!